A Few Minutes in the Life Of

I don’t like shopping for groceries. It’s not the food or the store, it’s the people. I like ordering my groceries online from HyVee and I’m going to write an article soon about how much I love that great new convenience. 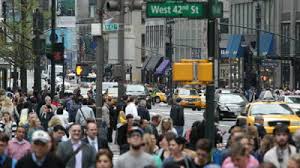 On the particular shopping day I’m thinking about here, the store was packed with other shoppers.  I’d never, not even on Christmas Eve, seen my local discount store this full of people. I kept thinking it must look a lot like the sidewalks of New York City during rush hour, which, if you believe every inch of film ever shot of those sidewalks is pretty much all the time. The mega-store where I shop was too crowded. I decided to stay and just get the whole unpleasant thing over with.

People were fairly decent about the lack of space available and while I don’t generally look at any human faces while I shop, today I was curious about any hostility that might be in the air because of the overcrowding.  As I said, people were pretty decent.

I noticed the butcher right off and decided to finally get an answer, firsthand, about the sell-by dates of the meat sold here. I asked him why all the meat expires tomorrow or yesterday.  He gave me the standard sell-by theory, “Blah, Blah, Yak, Yak…” I stopped listening.  Instead, I studied his nostrils.  Both were fairly well populated with mucul debris. When he quit yakking about shelf-life and blah, blah, I said, “Okay, thanks so much,” and walked away.  I didn’t buy any meat. I couldn’t.

time. My cell battery was nearly dead so I cautiously looked around at the other shoppers. I saw three young black men walking in my general direction. One of them had a platinum colored wig on his head and it was swinging wildly as he walked. I wondered why a young man would wear a platinum wig. I figured it was some kind of gag he was pulling to be funny. As the group got closer and by this time with a wtf   look on their faces as they stared back at me, I realized it was not a wig.  It was a winter hat with long furry ear flaps.  (Note to self: make eye appointment next week and mind own business stat).  I smiled and lifted my chin at them, it’s just me—hip older woman. They weren’t buying it.

The checkout line was fairly quiet, even with the thousands of shoppers waiting in the two open lanes. Only one small incident threatened the otherwise unremarkable queue when the checker picked up the plastic Coffee-on-the-Go cup I’d placed on the belt. I was pretty excited about the new cup. I love bringing my own home-brewed coffee along when I go places. She held the cup at eye-level and studied it. She looked confused. She whispered, more to herself than me, “I don’t know what this is.”

I leaned a little closer to her, gently, so as not to startle. In my softest voice I said, “It’s…a coffee cup.” She looked at me

blank-eyed and said, “I don’t know how to code it.” I told her it was okay.  Not to worry about it.  I told her I wouldn’t buy it after all.  She set it aside without further comment. She then finished her job, putting 300 dollars’ worth of groceries into 14,000 plastic bags.  Some items got a bag all to themselves. I don’t know why. A box of Swiffer refills would get along famously with a bottle of fabric softener in my way of thinking and there’d still be plenty of spare room for the four-pack of Always Save Facial Tissues. But I’m not a bagger. Surely there is some science to matching up products just right in a plastic bag. As I loaded the bags into my cart I shoved the single bagged items into other bags which only had one or two items in them. I felt both guilty and rebellious. I ended up with 12,000 bags.

I paid for my stuff and commenced my Leaving-the-Store-Routine, pulling on my black mismatched leather gloves, digging my truck keys out of my Gucci-brown purse and finally, the clarion call that signals the End Of My Business Here, I removed the giant pair of

cheap sunglasses from my skull where they hold my faux-baby-fine hair neatly off my face during all indoor activities.  When I’m out of doors, my reading glasses serve the same purpose, allowing my sunglasses to perch smartly across my nose, shielding my wrinkled eyelids and redirecting attention to my shiny, freshly pressed and smartly cut hair and sophisticated appearance.

On this otherwise ordinary day, every strand of my freshly straightened hair from the crown of my head to my hairline lifted straight up with my sunglasses and all five pounds of it then fell forward, covering the upper half of my face. Most of it clung to my skin but the wilder, more electrified pieces waved around my head in a defiant version of Watch Me Nae Nae. I could see them thrashing around even through the thick hair curtain across my eyes.

I was briefly paralyzed by this sudden interruption of my Leaving-the-Store Routine.  In     the split second that all of this all happened I imagined myself standing there frozen in place like the old Adams Family character Itt, abruptly transported from the distant past to this eerie new-age mega-store. Lost and confused. Too stunned to move.

The store is busy, I thought, surely nobody will notice me. How do I recover from this? Do I care? My cover is blown here. My leather gloves and big sunglasses are in this one damning moment rendered impotent and are exposed as the mere diversionary tactics they are. Suddenly, I’m not the hip and moneyed older woman I’ve tried to emulate for several years (certainly not a cougar, much too snobbish for that kind of vulgarity–but still deeply cool when seen in quick glimpses at 7-11 and Walmart, my most visited retail locations).

No. I’m just an old anonymous hausfrau doing the weekly shopping, disheveled and barely able to chew gum and walk at the same time. My socks don’t even match. My pant leg on the left side is half caught in the Velcro closure of the cheap clumpy boots I’ve worn for seven winters now. It’s all very clear. I’m exposed. It’s all been a lot of smoke and mirrors and here I stand, naked if you will, not cool at all but a nearly 60-year-old teenage girl who just wants to go home and weep in front of my computer while Neil Young croons Old Man on Pandora Radio and where I ask myself for the millionth time if I’ll ever feel like a real grownup with life all figured out and shittons of sage advice for my posse of young hipster mentees.

That all sounds a little overdone there but you can only understand it if you’re nearly 60. Or if you remember parts of the 70s when cool

was not such a slippery slope. Anyway, so there I was and this all really did happen in a nanosecond and all the while I stood plastered to the floor with my hands gripping my giant sunglasses and I imagine my mouth was poised in a partial O shape. But only for a second. I shook the hair off my face and slapped my glasses in place and resumed the squared-shouldered high-chinned affect that has delivered me peacefully from my willowy youth and into a graceless, clumsy old age, camouflaged with giant sunglasses and sleek leather gloves—matching or not.

I shot a quick glace around was relieved that I’d pulled off my usual smooth transition back to uber-cool when I spotted an audience. She was tall and lean and her $30.00 sunglasses perched strategically on her obedient hair and when she saw me see her she laughed. We both laughed. I said, “Stupid hair,” and we both laughed again. Humans. They’re okay sometimes.

I pushed my 12,000 bags out of the store and into the punishing grey cold of winter in the Midwest. The parking lot was full. Cars were lined up and stacked several deep in every lane and row, drivers vying for the shortest walk into the warm hell of Walmart.

My little red truck was waiting patiently for me right where I’d left it and was delighted at my return. I love you little truck. I plunged the empty shopping basket into the nearest snow drift.

I turned and stopped abruptly so as not to be struck dead by an industrial-sized SUV.  The driver was glaring at me and shaking her head, incensed that I would even consider walking in front of her vehicle. I wouldn’t have. I hate arrogant pedestrians. The enormous driver, lips as thick as a couple of Diamond Crown cigars, came to a complete stop and shook her gargantuan head at me, her chin folds flapping side-to-side in wobbly cadence. This went on for some time.  I stood still and waited to see how long she would stare me down.

She showed no signs of stopping her seething display. The SUV operator apparently had all day to efff around. I did not. I laughed a snorty laugh—not a good donkey laugh like when somebody falls in a hole. I gave her a friendly wave and my best Midwestern smile.  She rolled her giant marble eyes and her $40,000 SUV slithered forward, allowing me safe passage across the snow-packed lane.

I was glad to be back in my little red truck. Headed home. I love you little house. I’ll be there in a minute!

24 Responses to A Few Minutes in the Life Of

The Farms at Woodend Springs
I am Mami de Sofiona

I'm short and sometimes I'm sweet, but when it comes to writing it tends to go on and on!!

Musicolourist
Going for the Throat

Online Magazine About People and Places In Ireland

Sew Me Your Stuff

Learning to sew one stitch at a time

The View From Under a Cowboy Hat

News And Opinion In Wyandotte County
Notes and Drafts

A Place For Writers, Artists and Entrepreneurs To Learn, Dream and Grow